A friend of mine got a boyfriend. After a month of being together, the guy confessed that he had dated the ex boyfriend of his girl friend. He admitted also that he was attracted to men not just only women. But the girl had fallen in love already with her boyfriend. What is she going to do? Does she need to break her heart?

She should run, not walk away from him.

Bisexuality is spirit of homosexuality influencing person to be attracted sexually to same sex as well as having natural affection. Today’s legal and unbiblical culture has embraced homosexuality including marriage. Spiritual causes of problems is not recognized by “science” so called.

1. How can she trust him even if he promises not to be engaged in homosexual activities?

2. Sexual activity opens both partners to receive any demons the other partner has as well as the plethora of sexually transmitted diseases.

3. Illegitimate Sexual relations causes soul ties to the other person, opening up jurisdiction and spiritual authority for the Devil. Soul ties can be good such as in marriage or friendship or bad depending on situation.

The bisexual could become a believer in Christ if not already. But in either case he is attracted or may continue to be so to other males. Being involved with this person creates a spiritual can of worms problems potentiallly.

Spiritual deliverance is possible but who has knowledge, faith and experience in deliverance ministry work in SDA?

Casting out demons, canceling ancestrial, bastard or other curses, teaching the person to discipline themselves in thought life by The Word and faith to keep demons out is just the beginning.

Chances of success is possible but questionable. California has passed AB 2943 in the assembly that would make any attempt by therapists in changing sexual orientation illegal that involves payment. This could effect churches and even possible banning of the Bible because of the “anti LGBTQ” literature.

Amazing this comes from one who says there is no law! If the law of adultery and sexual misconduct is binding how come that a law that honours God is not of equal status? It should be of even greater importance.

I have already answered that. Read Paul, he was an Apostle and received more revelation than anyone else in the New Testament including the sacred secrets given him by Jesus Christ and wrote most of the New Testament other than the Gospels. He said it is the end of the law, which waxes old and soon to disappear. Stop the insults and do your own research and thinking if you are capable of such, before you open your mouth or write here.

You think you know more than the Apostle Paul?

I never pretend to know more than what the Bible says. Seems to me that you think that you can have the law to condemn fornication as it is written on the tablets of the law, but you claim the law about the Sabbath has been Nailed to the cross. This is blatant hypocrisy as far as I understand the Bible says God's law is a reflection of God himself. If you can ignore one law but uphold another, you are not speaking for God but the Devil as I have always said you where. 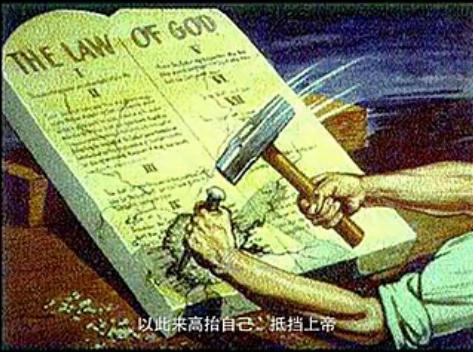 Just as I said above. You can’t understand Hebrews, Colossians or grace and your not Jewish are you?

I don’t think you can understand to whom a book is written to, the Covenant of the Sabbath was given to the Israelites and none other. Your the one who can’t understand Paul’s writings. Are you keeping the whole law, including not cooking on the Sabbath etc. you are a debtor to do the whole law. Guilty of violating one, guilty of them all.

We were discussing God's Commandments as far as I remember. Seems to me you are shifting the subject because you can not explain why one commandment is valid and one other is not.

You talk about the covenant let me remind you that the old covenant was written on stone as even you yourself has said many times. Now if you can read I show you what the new one says:

Heb 8:7 For if that first covenant had been faultless, then should no place have been sought for the second.
Heb 8:8 For finding fault with them, he saith, Behold, the days come, saith the Lord, when I will make a new covenant with the house of Israel and with the house of Judah:
Heb 8:9 Not according to the covenant that I made with their fathers in the day when I took them by the hand to lead them out of the land of Egypt; because they continued not in my covenant, and I regarded them not, saith the Lord.
Heb 8:10 For this is the covenant that I will make with the house of Israel after those days, saith the Lord; I will put my laws into their mind, and write them in their hearts: and I will be to them a God, and they shall be to me a people:

What did it say? In your heart, I know that your heart says Sunday, not Sabbath. God's Eternal law says Remember the Sabbath, no amount of weaselling is going to change this. Also, remember God only make Covenants with Jews be they in the flesh or the spirit. as it says

Gal 4:22 For it is written, that Abraham had two sons, the one by a bondmaid, the other by a freewoman.
Gal 4:23 But he who was of the bondwoman was born after the flesh; but he of the freewoman was by promise.
Gal 4:24 Which things are an allegory: for these are the two covenants; the one from the mount Sinai, which gendereth to bondage, which is Agar.
Gal 4:25 For this Agar is mount Sinai in Arabia, and answereth to Jerusalem which now is, and is in bondage with her children.
Gal 4:26 But Jerusalem which is above is free, which is the mother of us all.
Gal 4:27 For it is written, Rejoice, thou barren that bearest not; break forth and cry, thou that travailest not: for the desolate hath many more children than she which hath an husband.
Gal 4:28 Now we, brethren, as Isaac was, are the children of promise.
Gal 4:29 But as then he that was born after the flesh persecuted him that was born after the Spirit, even so it is now.
Gal 4:30 Nevertheless what saith the scripture? Cast out the bondwoman and her son: for the son of the bondwoman shall not be heir with the son of the freewoman.
Gal 4:31 So then, brethren, we are not children of the bondwoman, but of the free.

Anyway, as long as you reject God from your heart satan will take that place.

James, Adam was not a Jew. Adam kept the Sabbath with God in the Garden.  Jesus said the Sabbath was for mankind and that he was God of the Sabbath.   James you need to learn rather than teach.

No record in scripture for authority. It cannot be proved by history or scripture that any human kept the Sabbath as a ritual practice until Sinai.

I found this article on on the web

"Many people assume that the Ten Commandments and the covenant God established with ancient Israel are identical—and that both were abolished by Jesus Christ’s death.

But is such reasoning biblical? The facts show it is not. A close look at the Scriptures reveals that breaking the Ten Commandments was a sin before the covenant at Mt. Sinai, so arguments that they came into existence with that covenant and were terminated with it cannot be true. Let’s notice the scriptural proof.

God’s Word defines sin as “the transgression of the law” 1st John 3:4

The Bible also teaches that; “where there is no law there is no transgression” Romans 4:15.

Let’s use an illustration to clarify these points: Suppose you are driving on a motorway where no local or national speed limit exists. If you are travelling at a speed of 80mph, can you be given a ticket for speeding? What about 90mph? How about 100mph?… The answer is no! You cannot be given a ticket for speeding where there is no law stating a maximum speed or the speed limit. In other words, “where there is no law, there is no transgression.” A law has to exist in order to be transgressing or “breaking” the law.

So do we find transgressions of the Ten Commandments described as sinful before Mt. Sinai? Lets look at the evidence….

THE LAW OF GOD WAS KNOWN!

What was the difference between the characters of Cain and Abel? ….. 1st John 3:12 …..”Not as Cain, who was of that wicked one, and slew his brother. And wherefore slew he him? Because his own works were evil, and his brother’s righteous.”…..

Now notice that this Bible verse says that the works of Cain were evil, but the works of Abel were righteous. So there must have been a standard by which their characters could be weighed against. This standard must have defined the difference between right and wrong, good and evil. And what standard was that? The law of God. Take a look at these following Bible verses:

Genesis 13:13 …..”The men of Sodom were wicked and sinners before the Lord exceedingly.”

2nd Peter 2:7-8 …..”And delivered just Lot, vexed with the filthy conversation of the wicked; for that righteous man dwelling among them, in seeing and hearing, vexed his righteous soul from day to day with their unlawful deeds.”

Genesis 15:16 …..”But in the fourth generation they shall come hither again; for the iniquity of the Amorites is not yet full.”

Now how could the men of Sodom be wicked and sinners if there was no law in place?

And how could the Amorites be guilty of iniquity if there was no law?

And for the most clear cut Bible verse, have another look at 2nd Peter 2:7-8 above. It says that the people of Sodom did UNLAWFUL deeds. Now how can someone be UNlawful where there is no law? There had to have been a law in place for the people to obey, and that law was the Ten Commandments.

Now take a look at this following Bible verse: ….. Genesis 26:5 …..”Because that Abraham obeyed My voice, and kept My charge, My commandments, My statutes and My laws.”….. What did Abraham do (before Sinai)? He KEPT GOD’s COMMANDMENTS!! So how can anyone say the law of God didn’t exist before Sinai, when Abraham KEPT God’s law?

So very true Reasoning here is another example:

Gen 39:9 There is none greater in this house than I; neither hath he kept back any thing from me but thee, because thou art his wife: how then can I do this great wickedness and sin against God?
Gen 39:10 And it came to pass, as she spake to Joseph day by day, that he hearkened not unto her, to lie by her, or to be with her.
Gen 39:11 And it came to pass about this time, that Joseph went into the house to do his business; and there was none of the men of the house there within.
Gen 39:12 And she caught him by his garment, saying, Lie with me: and he left his garment in her hand, and fled, and got him out.
Gen 39:13 And it came to pass, when she saw that he had left his garment in her hand, and was fled forth,