I know this is what some of you want the SDA church to do, but we will not.  We are God's universal church and want everyone to join us.  Our policy of not allowing gay marriages in the church, but welcoming the couples to worship with us is perfect. 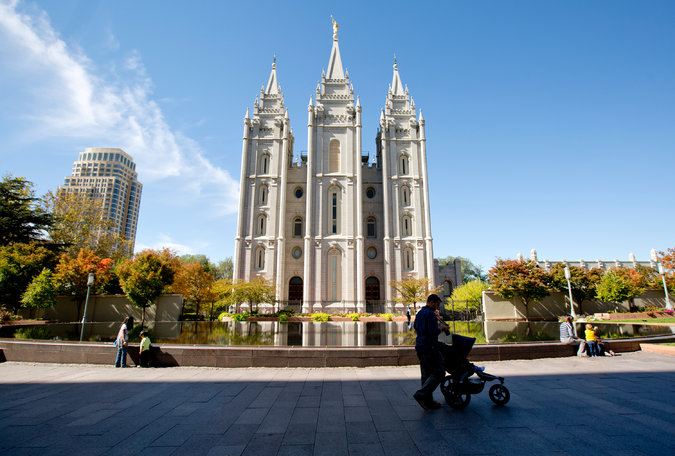 The Salt Lake Temple of the Church of Jesus Christ of Latter-day Saints in Utah.CreditKim Raff for The New York Times

Children of same-sex couples will not be able to join the Mormon Church until they turn 18 — and only if they move out of their parents’ homes, disavow all same-sex relationships and receive approval from the church’s top leadership as part of a new policy adopted by the Church of Jesus Christ of Latter-day Saints.


In addition, Mormons in same-sex marriageswill be considered apostates and subject to excommunication, a more rigid approach than the church has taken in the past.


The new policies were contained in a handbook for lay leaders that was disseminated on Thursday to those who administer the church’s 30,000 congregations around the world. The church made no public announcement of the change, but it was leaked to the news media and confirmed by a church spokesman.

“The church has long been on record as opposing same-sex marriages,” the spokesman, Eric Hawkins, said in a statement. “While it respects the law of the land, and acknowledges the right of others to think and act differently, it does not perform or accept same-sex marriage within its membership.”

Some liberal Mormons expressed outrage online at the new policies. Jana Riess, a columnist with Religion News Service, said she was livid that children born to those living out of wedlock, as well as rapists and murderers, can be baptized and blessed, but not children of monogamous same-sex couples.

Disciplinary councils are convened for Mormons accused of serious transgressions, including murder, rape, sexual abuse, adultery and apostasy. A disciplinary council is a formal church proceeding that can result in excommunication.

The church also added a section to its handbook that said that “natural or adopted” children of parents living in same-sex relationships (whether married or cohabiting) would not be blessed as babies or have a naming ceremony. These children are also excluded from baptism, which usually occurs at age 8, and from ordination into the priesthood, which Mormon males qualify for at age 12. The children also will not be recommended to serve as missionaries, which is a rite of passage for many Mormon youths.


Under the new rules, a child of a same-sex couple may join the church only after age 18 by meeting these conditions: He or she commits “to live the teachings and doctrine of the church and specifically disavows the practice of same-gender cohabitation and marriage”; does not live with a parent who is in a same-sex relationship; and receives approval from local church leaders and the church’s First Presidency — the uppermost leadership of the church.

John Dehlin, a gay rights advocate who is straight and wasexcommunicated earlier this year, said, “The inclusion of same-gender marriage as specific grounds for apostasy is surprising only because it really paints the church into a corner, and leaves them less room to slowly finesse a change over time.”

“Progressives were still holding out hope, but many feel that this closes the door on future change,” said Mr. Dehlin, the founder of Mormon Stories, a popular podcast and online gathering site for Mormons critical of their own faith. He predicted that the new policy would “trigger a huge round of excommunications for legally same-sex married Mormons.”

Shannon are you directly involved in evangelizing with the gay community?

If you are then you may at a local level want to speak with the leaders in your church about how to handle these issues, but in reality there is only a small population that is LBGT and I feel you are trying to make controversy where there is none.  Example: this thread about the LDS church.

What about the other 90% of people who are not LBGT that need truth our church offers.  Would you, for, example do Bible studies with a republican, pentecostal,  gun owner with a Trump bumper sticker on his pick-up truck?  Jesus came to save everyone from their sins not in their sins that includes the red neck as well as the gay.

Demographer Gary Gates last month released a review of population-based surveys on the topic, estimating that 3.5% of adults in the United States identify as lesbian, gay, or bisexual, with bisexuals making up a slight majority of that figure. Gates also disputes the well-circulated statistic that "10% of the males are more or less exclusively homosexual."

Rather than a political debate on how homophobic our church is I would rather you tell me how you are showing people of all walks of life about Jesus.

We are the universal church, I don't think we should shun one group in hopes of being more attractive to another; let's  welocme both gays and rednecks.  If one party is uncomfortable with worshipping with everyone then perhaps they should join a sect like the LDS church rather than joining the universal church.

The universal Church is the Roman Catholic church. SDA has a different set of doctrines tho the RCC. So they can not both be universal.

The other aspect of your universality is that we need to accept openly sinful persons practicing sinful acts, not even the Catholics do that.

So is this your vision for the SDA church future?

You must be a good dancer because you side stepped what I was saying with great skill.  Like Elijah says the Universal Church is the Roman Catholic Church.  I read this and heard this from Catholics, but I have never heard or read it about the SDA church until now.

It is quite telling that you say a redneck should join the LDS church.  What I am saying is that we should be giving the Gospel and the good news to all people along with the specific message our church is given.  What you are saying  "If one party is uncomfortable with worshipping with everyone" is that one should leave the truth to feel more comfortable.  You are also saying with this thread that the church is Homophobic. I take exception to this. If Jesus forgave the woman at the well with many "husbands" will he not forgive the homosexual.  I know my church would welcome someone seeking the truth, even if they had a gay past.   What you are talking about is acceptance of people who live outside of marriage in a sexual relationship having a role in the church.  If it is not acceptable for me to have 2 wives and a concubine, and be an elder it is not acceptable for a gay person to have a gay lover, for example.

The true question is that with such a minority of people being gay why such a laser like focus on the SDA church as a whole being homophobic because of what the LDS religion is doing?

Permalink Reply by Emmy Jai-Li Sthelen on November 9, 2015 at 10:04pm
Where would we stand and what message would we have if sin was openly accepted in this manner in the church? This is ludicrous. It is sad to see how like the world the church has become. What exactly sets us apart now?

Hi Emmy what sets us apart, yes good question indeed. We find persons here that is no different from the world here I have seen some believe in long ages, that would loose the importance of the Sabbath if we do not see God as the creator.

We see here the poster making the case for Homosexuals in the church. Besides she is in favor of WO.

I have seen persons who think that they can eat Bacon with their eggs for breakfast, and most likely wash it down with a cup of coffee.

With that sort of mindset one wonders why some even bother being Adventist at all. As we know the 3 Angels message is the reason for our being a church. If we take those messages seriously we should not be wanting to do those things I just mentioned.

Yes, I understand that you mean the Adventist Church is a message for everyone and that everyone should be welcomed to listen to the End-time message in any of our churches.

Who said gays are not welcome to listen to the end time message in our church?  Are you assuming this? Do we have a gaydar detector at the door stopping people?  What is up with this assumption of homophobia?

It happens over and over and over on these threads, this assumption and it comes with an attitude of superiority because of a certain political mind set.   I am not homophobic nor is anyone in my church.

If a person is living in sexual sin no matter who they are they are welcome to come and learn in church and hopeful will be transformed by the message.  There are many non-married couples who have welcomed the message, accepted Christ and then married and become a part of the church.  What you and Shannon are talking about is practicing gays becoming elders and pastors. Any person openly practicing any sin should not be leading no matter the sin.

We can't be the universal church if we don't welcome everyone.  If we say we love gays and rednecks, but we don't want you to worship here, go fellowship in the Church of Christ or the LDS church, then we have admitted that we aren't the church for everyone.

Now some people who are not comfortable with worshiping with everyone, we can only invite and welcome them - if they choose to go somewhere else at that point we have still done our job.  We should NOT shun one group to make another more comfortable.

We can't be the universal church if we don't welcome everyone.  If we say we love gays and rednecks, but we don't want you to worship here, go fellowship in the Church of Christ or the LDS church, then we have admitted that we aren't the church for everyone.

Only you are judging fellow members for doing this and by projecting what the LDS church is doing besides. You are making a controversy where there is none. I want to say bearing false witness, but I will not.   What makes you assume that my church or any SDA church has a member standing at the door excluding gays?   If anything my largely  conservative church is very welcoming to people of all walks of life and you are speaking ill of them by default.

It sounds like we are in agreement then.  I am only pointing out what the LDS church did and then saying I'm glad we don't do that and that we welcome everyone instead.  I'm not implying anything deeper than that.

Permalink Reply by Jason M. on November 8, 2015 at 8:19am
What text is this Shannon? Where in the bible can I find this?