Lessons from the President

I hope you all saw the President's speech last night.

What Adventism (and Christianity) Can Learn from President Obama Last night at the Democratic National Convention, President Obama gave one of the most fascinating political speeches I have ever heard. I am trying to refrain from the realm of hyperbole, but I truly believe that this speech will be remembered after President Obama has long left the political scene. As I sat ruminating on what commentators from both sides of the aisle described as a great speech, I began to see connections between what President Obama so deftly accomplished tonight and what we as Christians attempt to accomplish as an element of our faith. Now certainly President Obama has different goals from the church. President Obama was seeking to sell us on his legacy and the legitimacy of Hillary Clinton as the keeper of that legacy. Christians are seeking to sell people on the gospel and Jesus Christ as someone whose legacy should be followed. But as I thought about the President’s speech, I realized that much of Christianity could learn a thing or two from our President about how to share the gospel.1

1. Acknowledge that life is hard – I saw this in two places last night. The first was in the introductory video before President Obama came on stage. What struck me in that video, in addition to the president’s resolve, was how much pain so many people have endured during this Presidency. From multiple mass shootings to job loss and recession, people suffered. The second place I saw this point made was within the speech itself. On at least two occasions the president doubled back to acknowledge that our society is not where any of us would want it to be. As he said, “We’re not done perfecting our union.” As Christians we should never run from the pain of present reality. It is in connecting with that pain that we meet people where they are.

2. Remind people of their blessings – Especially in contrast to the Republican National Convention last week, President Obama’s speech was a reminder that not everything is bad in this country. Violent crime is down in aggregate, although you wouldn’t believe it to hear the pessimism of some. Unemployment has generally been falling since it peaked at 10% during the Great Recession. Over the last few weeks I have been dismayed by the unjustified murders of African-American men at the hands of the police. As soul-crushing as this time has been personally, last night was a reminder to me of all the good that is occurring in the life of our nation as well. While Christians should never run from the pain of the present reality, we also must guard against being fully consumed by that pain. I believe sometimes our presentation of the gospel attempts to paint this world as entirely negative. I think we do that because we want to cast Jesus as a stark contrast from this sinful planet. To do that, however, is to ignore all the blessings that fall on both the just and the unjust and to paint an inaccurate picture that actually hurts our witness.

3. Be willing to help improve current reality – President Obama’s recommendation of Hillary Clinton was a testament of not only her willingness to help some of the least among us, but also an acknowledgment of her eagerness to do the work necessary in order to help people move beyond their present station in life. He gave example after example of her work with children, 9/11 first responders, and women, showing how Secretary Clinton spent her life in public service “in the arena,” fighting or the improvement of people’s lives.  Helping to better people’s current circumstances is an important element of the gospel. The good news of Jesus Christ is not only about the success of His salvific mission, but also the story of the good that He did for people while He was here. Every miracle recorded in the gospels is a story of Jesus’s desire to improve the current reality of someone and His willingness to do the work necessary to bring about that change. People occasionally accuse Christianity of being so heavenly-minded that it is of no earthly good. If as Christians we have allowed ourselves to stagnate in this way than we have failed in presenting an authentic picture of the Savior we serve.2

4. Present the hope of a better day – Hope. It has been the singular theme of President Obama’s time on the national stage. Last night he spun the idea of hope, as he does from time to time, back towards the American people as both the engine and the destination of the hope that resides within in him. For the President, hope in the American people is what has, as he said, “fueled [his] dogged faith in our future.” That future of course, is a future that fits the goals that he has for our nation – better economic stability, healthcare for all, peace and security internationally, and justice for all here at home.

Our hope, however, is even greater than the hope the president describes. We are sharing what should be a living faith, a living hope that believes in not just national peace and prosperity, but truly universal peace and prosperity. A hope that transcends all petty human divisions under the banner of a loving Savior who sacrificed so much simply because He loved us. We believe in not just the coming of a better day, but the coming of a perfect day. The heart of the gospel is this hope.

Permalink Reply by Jason M. on July 28, 2016 at 10:26pm
Liberal doctrines, not surprised by your support of it. I wish you could see the real aim of this article.

Yes, those that blindly follow Politicians are lacking in that department.

Permalink Reply by Jack C Chaffin Jr on July 28, 2016 at 10:42pm
What you see as "practicing hope", I see as shredding the Constitution, disrespecting the concept of private property, legalized theft, supporting terrorism, and taking control of 1/6 of the nations economy. Just because a man speaks well doesn't mean that his cause is just or his actions righteous.

My hope can only be fulfilled by my God not some orator who criticizes others for fear tactics but takes advantaged of every tragedy there is before the facts are fully revealed to spread his own agenda based on peoples fears.   I find it funny this man and his party use fear to terrify people to vote against a loud mouthed braggart when he makes an obviously sarcastic comment about their dirty laundry being aired by another country.  They said this sarcastic comment encourages people to undermine our security as if they are naive to believe every country even our allies aren't already spying on us.  This is of course after Obama openly and boldy made a threat to one of our greatest allies by threatening to send them to the back of the queue if they didn't vote his view on their politics...... Yeah, I see his hope and I hope it never comes to fruition in my lifetime because it's one based off fear just as much as Trumps message.

Oh and lets not forget, it was their dirty laundry that got aired. Not some made up propaganda. And they have yet to say otherwise.

You talking about the ones that keep us living in a fantasy world?  Yeah, I stopped those a long time ago.  You got anything else other than that to backup your comment?

Kat, I guess when someone steps on another person's god, it illicits those kind of responses: 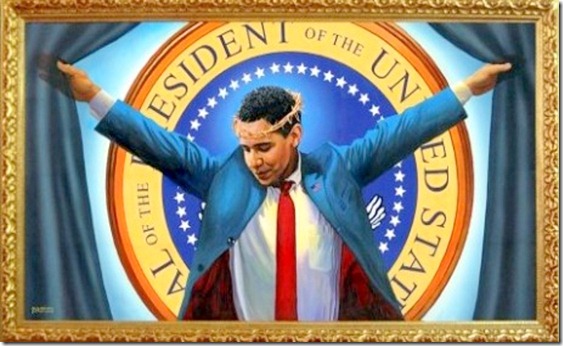 We really should pray for him.  I have read much trying to learn more about the man Obama and I still do not know what his true beliefs are.  One of the most interesting aspects of Pres. Obama to me is that he has SDA roots in his family in Kenya.

Does he know that you should call no man "father" as a title according to the Bible?

It is interesting that he calls the pope "holy father"

Quote to Pope Francis:  "Holy Father, on behalf of Michelle and myself, welcome to the White House."

Maybe to some liberals the use of this title is no big deal.  Prophetically speaking, it is amazing that neither party had a problem with the pope's visit.  Nor do I think either party will have a problem with Sunday law legislation. Given its talk of saving the planet and global warming.  What is also interesting is how hipsters and leftists love Pope Francis.  He seems to be in line with your political leanings.

President Obama said that HealthCare is a right. Um yeah, I don't need you or the government to obligate me for me to get health care. Because of ObamaCare, you have destroyed thousands of companies which includes small businesses. Thanks for making America not so great and a big embarrassment to the entire world.