Hello all,
This is the 1st time I have posted.  I am hoping to get some insight on a topic that I keep being led to over and over again over the past few weeks.  I have recently reaffirmed my relationship with Jesus.  I never felt as if I lost a total connection with God but that my spiritual life was very lazy and self serving. God has led me to this place where I am committed to following his will for my life as he leads and not how I interpret things to fit my lifestyle.  I have recently decided to put away the jewelry that I was wearing due to this conviction.  I guess deep down I never really felt right wearing it but I had ways to contort the meaning of the scripture to make it fit my desires.  I had the change of heart while listening to an amazing facts sermon.  Doug Batchelor pointed out that when God tells us we should not do something, then we should not do it!  (1 Tim 2:9).  How have I missed it this whole time?  God's messages to us are simple and straight forward and we have a way of contorting things to try to make it safe and familiar to us so we won't have to do much work in our lives to convince ourselves that we are living as God would want us to.
I wanted to tell you about the above revelation to me to set the stage for the next issue that I keep being drawn to and that is of head covering.  The way I read it in the bible, head coverings for a woman while praying/prophesying seem to be even a more important issue than the issue of plain dress. (1 Cor 11:3-16).  According to scripture I am dishonoring God if I do not do this.  I do not believe that either the wearing of Jewelry or dress is a salvation issue but I believe that God leads people in their walk with them to these messages of quiet reverence and remembrance of him in every aspect of our lives in order to draw us closer to him and as a result draw others to him as well.
I don't know about you but I want to do everything that God asks me to do regardless of how ridiculous I think it may be at the time.  This is why I feel rather torn right now and these are the questions that I have.
1)  Why do we as Seventh day adventists who claim to follow the bible as written not follow this guidance on dress when we follow the command to dress simply?  Some would argue that the issue of head covering is a cultural one but the same argument could be used for the doctrine of not wearing jewels.
2)  Does Ellen White have anything to say to this issue that could be applicable to this day in age?
I just feel a little lost about this issue.  I mean if I said to God on this scripture. " Yes Lord I will take you at your word and follow your guidance and then take up this style of dress" that would be so foreign to other Adventists and I feel as if maybe that could possible unintentionally draw attention to myself and maybe even cause others to fall.  On the other hand I read somewhere in one of EGW writings that we are not to follow after others way of doing things just because that's the way it has always been done.  We should be following GOD and GOD alone!!!!
Is there anyone out there who has had the same questions and has some insight to offer?  I would be very appreciative so that I can address these thoughts in my head.
God bless
Janelle :)

Clements dear, i understand this differently from the way you understand it. I have explained my understanding of this elsewhere on this post.

since this is my conviction, can we just conclude and say its ok for me to follow my conviction despite the different views? as in, sincee i am moved to do it, and I am happy and contented doing it, can I just go ahead and do it without dragging into an urgument.

Have a blessed Sabbath.

Well, pick up a history book and study the era.  Also, Mrs. White mentions covering up while outside to protect from the elements, like the sun.  Thus the term "sun-bonnet."

You can follow your conviction, but joining the chorus of abusing the SOP for pet projects isn't an acceptable position.

And is this era more modest or less modest than that era ?  You will see in some of her pictures  a head covering that was not a "sun bonnet." While I am still studying this I think the Amish may have something. The idea Scripture is saying that hair is the woman's head covering  has some inconsistencies.

They do.  Calvinism.  Shunning.  Total supremacy by a Bishop.  This austerity is not required either by scripture or SOP.

Do you know what a 19th century sun-bonnet looks like?  It was about practicality. 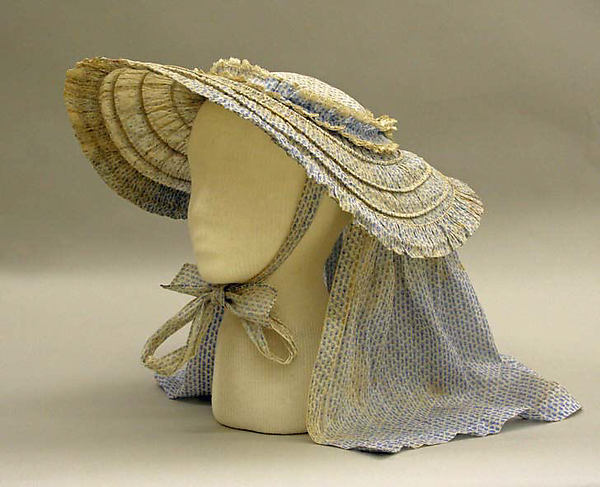 I bet there are also some things that you are convicted to do that I cannot understand because I have not had a similar conviction. We all are on a spiritual Journey here and the best we can do is encourage each other and cheer each other on our homeward journey.

Can you imagine how wierd it was for Abraham to claim he has a conviction that he should leave Ur to some place he did not know, that he had word from God to circumcise all males in his household, and wierd of all that he should sacrifice his son. They all appear non-sensical and fanatical. but because he was faithful, God testifies thaat He knows him and call him His friend. He also is in the Wall of Faith.

Head covering may also appear non-sensical and fanatical, but because I have a very deep conviction about this, and I actually have my concience troubled if i do not cover, I will be faithful and cover.

You have abused and misquoted Ellen White, because you have a pet project.  That I take extreme umbrage to.  However, if you want to make a specticle of yourself, because you desire attention, that is your issue.  But, to impose it on the body, which would violate the very principal of modest dress, which is not to bring attention to oneself, then that is not proper.

Frankly, if you want to take your concept of modesty to the extreme you would prefer, I do have a suggestion.

have a blessed day and week ahead.

Amen. What I don't understand is why men that are not married to any of the women that are discussing this subject are so insistent that we accept their opinions and go against our own personal convictions. This is about respecting and honoring our husbands. Out of Christian courtesy I think it would be well if they would take a more gentle approach and not try to be the conscience for another mans wife. I'm sure that they have some wisdom but they cannot be the conscience for another person---and more so when it is another mans wife. Shouldn't this be a ladies only subject? I find the attitude expressed by more than one man here disturbing to say the least.

uh please do not end this topic I find it fascinating Cultural issues have been a heated deebate  for such along time . This topic seems to be less about debate and a willingness to be led By the Lord as to its true meaning..

I have to admit I NOTreally sure what is meant but I have heard those  fluent in the jewish culture speak on it and to them it was said to be a prayer shawl they used at this time and many in the jewish community still do so till this very day.. My friend years ago was a bible worker and she seldom wentto church without her wearing a covering over her head a felt cap of some sort held in by a hair clip odf some sort haha I sorry but i just not familar with womens fashions to be able to get the name down pat,

,, No it not a salvation issue a must know issue but then again if the Lordis bringing it to yourr personal attention Miss Janelle He hasto have a particular reason for doing so .. hmm. Iknow at times when we reading passages that Satan too is just looking over our soldier ( well maybe not satan himself but his angels ) May I ask a sincere question too with it being shrugged off as  my over active immagination??

Can not then  evil angels whisper to us and tells us certain aspects of the scriptures need to be kept like in the days of old or we can not be saved > Can evil angels bring up passages that are not fully understood and place in our minds what the ywant us to believe it says ?  .Iheard aGR8 minister  a man I admired a whole lot as a young  th Day Adventists tell me that when at times he is  in prayer  THE  Devils angels come in with all these impure thoughts and other issues and it was so hard to concentrate..

May I ask again  then if men of God struggle against evil forces is it not easier for evil angels to acess our minds and divert our attention also from that which is a real issue and that which is not??

Oh and Bessy I like your chain of thought also  and I want to make myself perfectly clear  I AM  in no way underminding what u have written in here .. I ENJOY seeing new ones in here write and see what it is they have learned too ..

Hi Uncle Murray, i understand you are not undermining. I also appreciate your contribution.

It may be cultural, but universally, women did cover from the old Testament, throught to the New testament, and head covering became unpopular in the early 20th centuries.

It may also not be a salvation thing, and maybe it is not for all.....maybe. But, if i am convicted to do it and i do not do it, that is disobedience.

How do we differentiate whose conviction we have? By the guidance of the Holy spirit. he gives us Discernment. Again, if anyone speaks contrary to the Word of God, then that is NOT the right spirit leading.

having prayerfully studied this subject, negelected  doing it, and having a guilt conscience and later doing it and finding contentment, and further study and prayer, I am convicted that the spirit behind this is the Spirit of God.

Permalink Reply by JohnB on November 22, 2010 at 6:15am
In some parts of the SDA world the covering of the head by married women is practised. Following Paul's writings in 1 Cor.11, as soon as a woman marries she is expected to cover her head whilst in church. The injunction does not apply to single women.

What I find rather intriguing is that no matter how many times 1 Cor.11 is quoted, everyone seems to ignore 1 Cor. 11:16, "But if any man seem to be contentious, we have no such custom, neither the churches of God."

Permalink Reply by Bobby on February 9, 2011 at 8:40pm
What do you understand by that verse JohnB?