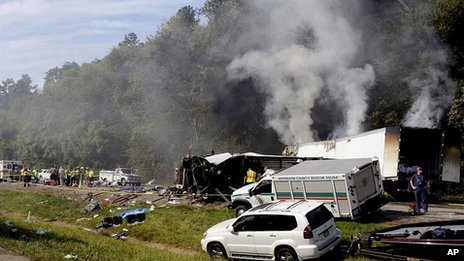 The lorry caught fire and the bus overturned after the collision

At least eight people have been killed and 14 injured in a crash involving a bus and two other vehicles in the US state of Tennessee, police say.

The church-chartered bus is reported to have blown a tyre and collided with a sport utility vehicle (SUV) and a lorry on Interstate 40 in Jefferson County.

Pictures from the scene showed the bus overturned and the lorry on fire.

Six of the dead were on the bus and one each from the SUV and the tractor-trailer, a police spokeswoman said.

The bus, from Statesville, North Carolina, had been travelling east.

Interstate 40 was closed in both directions while emergency crews dealt with the incident.

The Statesville Record & Landmark newspaper in North Carolina reported that the bus had been chartered by the Front Street Baptist Church in Statesville.

Parishioners had been on their way back from a visit to Gatlinburg, Tennessee, a church spokesperson said.