What Is High Blood Pressure? 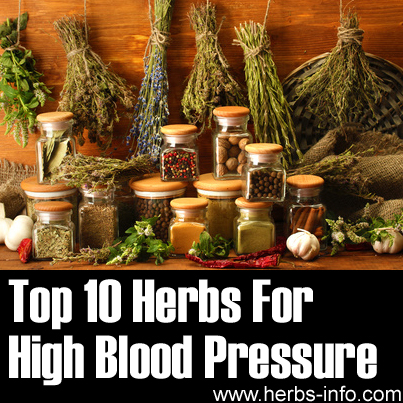 For those who seek alternative or complimentary treatments, it is thought that home remedies (such as herbs and supplements) and changes in lifestyle (including, but not limited to: dietary changes, quitting smoking, and/or limiting alcohol consumption) may help to control blood pressure and reduce the risk of developing stage two hypertension. Studies have shown that certain herbs may be beneficial in terms of treating, managing, and preventing high blood pressure:

Indigenous to central Asia, garlic is has a history of use as a remedy for conditions such as smallpox and tuberculosis. A common ingredient in traditional dishes of various cultures, garlic has received scientific interest in recent years regarding its potential to prevent and reduce high blood pressure. A number of in vivo studies have resulted in data that suggests a relationship between garlic and cardiovascular health. [4] Results from clinical trials indicate that treatment with garlic may cause significant reductions in both systolic and diastolic blood pressure. [5] Other studies suggest that garlic may reduce the risk of blood clots.

Also called Asian ginseng, panax ginseng is different from American ginseng and Siberian ginseng. Used for centuries in traditional Chinese medicine, ginseng has been mentioned by the National Center for Complimentary and Alternative Medicine regarding its potential to control high blood pressure. [6] Results from a number of laboratory studies suggest that ginseng might be useful as a treatment for high blood pressure and related ailments. [6]

Used for centuries in traditional Indian cooking, cardamom is most commonly regarded as a spice rather than a medicinal herb. However, both green and black varieties of cardamom have a history of use in the medicinal systems of various indigenous cultures. [7] A study published by the Indian Journal of Biochemistry and Biophysics--in which cardamom was administered to 20 patients with stage 1 hypertension--found cardamom to be effective as a blood pressure-lowering agent. [8]

Maitake, the Japanese name for the Grifola frondosa mushroom, is called Huishu hua in China and has also been referred to as monkey's bench, shelf fungus, king of mushrooms, and dancing mushroom. [9] Maitake has historically been utilized for its antiviral properties, but has more recently been used as a treatment for obesity and related conditions such as diabetes, high cholesterol, and high blood pressure. A 1989 study published in the Journal of Scientific Vitamin found that a daily dose of maitake significantly lowered the blood pressure of hypertensive rats. [10] Results from a 2010 study (for which a rodent model was also used) suggest that maitake mushrooms can lower blood pressure caused by the aging process. [11]

Technically a fruit but often referred to as a vegetable, the tomato is a key ingredient in traditional dishes of various cultures. Not widely recognized among the general public as having medicinal value, the tomato has been studied in recent years regarding its potential to manage high blood pressure and related ailments. A study published in the American Heart Journal in 2006 discovered that stage 1 hypertensive patients experienced a significant reduction in blood pressure when treated with tomato extract of a high antioxidant content. [12] In a recent study conducted in Israel, researchers found that a tomato extract supplement greatly improved the conditions of hypertensive patients when compared to placebo. The blood pressure-lowering effect of the tomato-extract supplement were attributed to the high concentrations of vitamin E, lycopene, and beta-carotene (three potent antioxidants). [12]

This herb is probably one of the best natural treatments for high blood pressure. It should no longer be a surprise since onions are considered as cousins of garlic which is also an excellent herb for hypertension. Onions contain high level of quercetin, a type of antioxidant flavonol known for its ability to prevent stroke and heart diseases. Many researchers speculate that quercetin helps the body in reducing its production of angiotension II, a powerful compound that causes the blood vessels to constrict which result to high blood pressure. [13

In a scientific study conducted to test the effectiveness of onions, researchers concluded that onions play a significant role in lowering the level of blood pressure. Subjects of the study who took onions experience a reduction of 5 mm Hg diastolic and 7 mm Hg systolic. [14

Regular consumption of raw onions is useful in enhancing the proper functioning of the arteries. In a study conducted at the University of Utah, researchers claimed that intake of raw onions is beneficial in maintaining the flexibility and elasticity of the major arteries that are tasked to pump blood from the heart to the body. It can also help in reducing the stickiness or the viscuosity of the blood thereby preventing the formation of blood clot. [15

Not technically a herb, of course, but carrots can be utilized for their health benefits, so we included them! Best known health-wise for its beta-carotene content, carrot is a powerful vegetable fortified with various health nutrients that are very beneficial for the body. Today, it is considered as one of the best naturally beneficial vegetables to take for people suffering from high blood pressure.

This vegetable is also an excellent source of potassium which plays a major role in reducing the level of blood pressure, thereby preventing the development of heart diseases. When taken as juice, carrots help in stabilizing one’s blood pressure by regulating the functions of the kidneys and the heart. [17

For thousands of years, Chinese hawthorn has been used by different cultures and societies in treating and managing high blood pressure. Many clinical trials have proven the claim on Chinese hawthorn’s effectiveness in dealing with hypertension. According to research, this herb is rich with two highly potent antioxidant agents, oligomeric procyanidins and flavonoids, which are definitely good for the heart.

The herb also contains alkaloid rhynchophylline which is effective in preventing thrombosis and platelet aggregation. This led scientists to theorize that Chinese hawthorn is beneficial in lowering one’s blood pressure, in thwarting stroke, in prevent the buildup of plaques on the walls of arteries as well as in inhibiting the creation of blood clots in the heart, brain and arteries. [18

Commonly used a seasoning for Asian and Indian cooking, ginger is widely recognized today as an excellent herb that combats hypertension. In addition to its ability to improve the circulation of blood, ginger also works by relaxing the muscles that surround the blood vessels. [19

Ginger works by lowering the level of bad cholesterol in the body which when left uncontrolled, can lead to the formation of plaques along the walls of arteries. It may create blockages in arteries and blood vessels which can greatly affect blood pressure. These plaques may also affect the elasticity of the arteries which can result to higher blood pressure.

This herb is also effective at preventing the formation of blood clots which results to a reduced risk for strokes and heart attacks. Blood clots usually prevent better circulation of blood to and from the heart. [20

Believed to have originated from Egypt, flaxseed also makes a great herb for high blood pressure. It contains high levels of α-linolenic acid, a type of essential fatty acid, which is believed to be beneficial in the prevention, treatment and management of arthritis, inflammatory bowel disease and of course, hypertension.

One research claimed that a diet rich with omega-3 fatty acid can significantly help in lowering the level of blood pressure of those diagnosed with hypertension. Also, flaxseed is beneficial in reducing the level of bad cholesterol in the body, improving one’s tolerance for glucose, and of course, by acting as a powerful antioxidant. [21

Results of another study conducted in Los Angeles California revealed that after six months of administering flaxseed on patients with peripheral arterial disease, the level of systolic blood pressure dropped by 10 mm Hg while dystolic blood pressure was reduced by around 7 mm Hg. [22 Furthermore, researchers concluded that flaxseed contain powerful constituents like enterolignans, fiber and alpha-linolenic acid which scientifically proven to be effective in lowering the level of blood pressure. [23

Just what i needed to recommend to my patient. Thank you