VATICAN CITY STATE — Vatican officials have confirmed that Adventist pastor and television personality, Doug Batchelor, was deported from Vatican City today. Batchelor was removed by Vatican security while he was filming a segment for his popular television show Amazing Facts.

Vatican officials cited “unprovoked negative propaganda” as the reason for Batchelor’s ejection. Although Batchelor himself has yet to comment on the incident, analysts were quick to point out that the TV presenter has been an unusually outspoken critic of Pope Francis and his policies. “His Facebook feed seems to be dedicated to bashing the Pope on the one hand and preventing his denomination from ordaining women on the other,” reported Christianity Today.

“Although Adventists have legitimate prophesy-related concerns about the role of the Papacy in last-day events, Pastor Batchelor’s incessant critique of the Pope’s every move has obviously ruffled some feathers,” said an unnamed GC official, responding to the news of Batchelor’s deportation. “While we appreciate Pastor Batchelor’s unquestioned sincerity, his narrow focus runs the risk of portraying our church and its members as being anti-Catholic and that is not the image we seek to cultivate.”

The same official mentioned that a church delegation will be welcoming Batchelor as he arrives at the General Conference for a debrief today. The message? “We love you. But seriously, cool it.” Link

Thanks for that interesting Post Jason. The line blow caught my eye in particular:

"While we appreciate Pastor Batchelor’s unquestioned sincerity, his narrow focus runs the risk of portraying our church and its members as being anti-Catholic and that is not the image we seek to cultivate.”

I myself applaud Pastor Bachelor for his seal to keep us informed on what is happening in the Vatican. As of late we have seen many tiles been placed in the prophetic Puzzle. I wonder what Image the GC want us to be portraying to the Vatican. We know the end of the story why do we need to be cow towing to the Vatican is my question? The Prophet of old said:

Isa 58:1  Cry aloud, spare not, lift up thy voice like a trumpet, and shew my people their transgression, and the house of Jacob their sins.

This is our problem, hatred. Why can't we lead in love.

"It is true that we are commanded to "cry aloud, spare not, lift up the voice like a trumpet, and show My people their transgression, and the house of Jacob their sins." Isaiah 58:1. This message must be given, but while it must be given, we should be careful not to thrust and crowd and condemn those who have not the light that we have. We should not go out of our way to make hard thrusts at the Catholics. Among the Catholics there are many who are most conscientious Christians, and who walk in all the light that shines upon them, and God will work in their behalf." (9Testimonies p.243)

"Brethren, I feel hurt when I see that so many decided thrusts are made against the Catholics." (CW p.64)

It is to late Stewart we are seen as anti-Chatholic already. Is that we need to tread a fine line I do not think so.

Would-be Guardians of the Doctrine—The rebuke of the Lord will be upon those who would be guardians of the doctrine, who would bar the way that greater light shall not come to the people. A great work is to be done, and God sees that our leading men have need of greater light, that they may unite harmoniously, with the messengers whom He shall send to accomplish the work that He designs they should. The Lord has raised up messengers and endued them with His Spirit, and has said, “Cry aloud, spare not, lift up thy voice like a trumpet, and show My people their transgression, and the house of Jacob their sins.”{CW 38.1}

Let no one run the risk of interposing himself between the people and the message of heaven. The message of God will come to the people; and if there were no voice among men to give it, the very stones would cry out. I call upon every minister to seek the Lord, to put away pride, to put away strife after supremacy, and humble the heart before God. It is the coldness of heart, the unbelief of those who ought to have faith, that keeps the churches in feebleness.—The Review and Herald, July 26, 1892.{CW 38.2}

I agree with you Ian. We are already seen as anti-Catholic, and I doubt that that will change. (We don't often make it apparent that we have an interest in the welfare of the Catholic people.)

But true; one of our distinctive messages is, "Babylon is fallen...".

This is meant to be a big part of our work, and yet we don't apply this exclusively to the Catholic church, do we? It applies, for the main part, to professedly Protestant churches. That is where the bulk of God's people still are. And when the call is made to "Come out of her My people", most of them will come from the nominal Protestant denominations. (These things are explained further in GC 383.)

You are right. Going out to prove other wrong is not the way to do it. Showing truth through friendship' and love goes a long way.

Usually proving others wrong is our way of proving us right, obviously.

I married  a Catholic, I was a back skidded SDA. We attended SDA church often and were married by an SDA minister at my wife's request.

Years later my wife was baptized by her own conviction, later I feel she was the positive influence that brought me to re baptism.

What would you think the outcome would have been if Elder Betz had said "I won't marry you because your bride is a Catholic ."

instead he said, "I see you attend regularly, so I consider you as members of our congregation," Then he added, " sometimes I think members of the congregation are more Christian than some of the members." to my wife that meant you are welcome here, rather then you are a catholic come back after you change.

As a result of love, we now have children and grandchildren who are active church members that love the Lord. Prayer is central in our lives. Parse God for showing love to a catholic.

Interesting quote, but the statement says "hard thrusts". Has Pastor Doug made "hard thrusts"? Sometimes the other statements from Ellen White regarding this are not quoted such as:

"Let not those who write for our papers make unkind thrusts and allusions that will certainly do harm, and that will hedge up the way, and hinder us from doing the work that we should do in order to reach all classes, the Catholics included. Over and over the message has been given to me, that we are not to say one word, not to publish one sentence, especially by way of personalities, unless positively essential in vindicating the truth.” Gospel Workers, p. 326.

In many cases, it is "positively essential in vindicating the truth". No "unkind thrust" means exactly just that: Please be kind, humble, and loving when stating pointed truth.

I agree. If this story is true, Pastor Batchelor should stop bothering the Pope. He and the Amazing facts ministry are not perpetuating truth. This is an agenda based organization which is willing to stretch the truth in order to prove points. 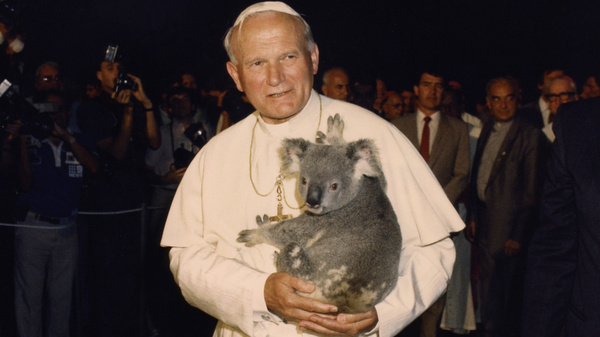 I believe that the "thrusts" that Ellen White speaks of in the Spirit of prophecy writings are those things that are directed against Catholic PEOPLE who are conscientious in their faith and need to be befriended and loved and not criticised for what they believe. Its a different matter when we read in those same writings about what the papacy stands for and what it has done throughout the centuries of spiritual darkness and persecutions of faithful protestant Christians. Those things can be read in her books and an understanding gained of where the true protestant message should be applied--to those in the hierarchy that have ORDERED the killing of countless thousands of lovely godly protestant people through the ages. In the same way Christ, when on earth, spoke in kind and simple terms to the common people of Israel in order to teach them the truth, but spoke words of rebuke to the church leaders of His day. LET'S SPEAK AND WORK AS JESUS DID!

For myself, for instance, I speak pleasantly to Catholic people in a manner to enquire why they believe a certain belief. For instance, why do they believe that the priest has power to change the wafer and wine into the body and blood of Christ when every time that they eat it it is, in the mouth, still only a wafer and wine to taste and not flesh and blood! Likewise, why are the 10 Commandments different in their Bible to what they are in their catechism. This should cause them to look into these things and search for themselves to find what is right or not.

God bless you all as you witness to others.

For a daily devotional message request it at rdv0044(at)gmail.com

Interesting, but I like what brother Ian said....while I have no problem with Catholic people, the organization is dead against us politically....